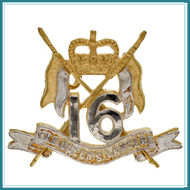 This unit was formed as the 16th/5th Lancers in 1922 by amalgamating the 16th Queen's Lancers and the 5th Royal Irish Lancers, then both in India.

The 5th (Royal Irish) Lancers had been disbanded the previous year, so it was re-raised as a single squadron especially for the amalgamation. It had been dishonourably disbanded between 1799 and 1858, putting them 18th, not 5th, in the cavalry order of precedence and this is why they took second place in the new Regiment’s title.

The new unit was posted back to England in 1926 and remained there until 1937, when it returned to India. It was still there on the outbreak of the Second World War (1939-45) and still a mounted regiment and it sailed for England in January 1940 to mechanise.

The Regiment initially provided motorised machine-gun troops to defend Britain against possible German invasion in the autumn of 1940. Once that threat had lessened, it was switched to train on Valentine and Matilda tanks in November 1940. It deployed to Tunisia in November 1942, where it was re-equipped with Sherman tanks the following year and fought at Kasserine and was involved n the final capture of Tunis during May 1943.

The Regiment landed at Naples in January 1944, where the terrain was ill-suited to armoured warfare although it took part in the 8th Army's advance through the Gustav Line at Cassino and the rapid advance north of Rome. By the time it fought in the Apennines  later in 1944, it was primarily operating as infantry. Even so, by the German surrender in Italy in May 1945, the 16th/5th Lancers had pushed the furthest west of any regiment in the 8th Army.

The Regiment spent its first post-war months as occupation troops in Austria, dealing with refugees and reconstruction. In 1947 Princess (later Queen) Elizabeth became the Regiment’s colonel-in-chief and in 1948 it deployed to Egypt for five years.

Between 1945 and 1993, the Regiment deployed to West Germany seven times. In 1954 it was renamed the 16th/5th The Queen’s Royal Lancers, taking the ‘Queen’s’ element from the 16th Lancers and the ‘Royal’ element from the 5th Lancers. The Regiment, as a whole, spent two years in Northern Ireland from 1971, while individual squadrons were also posted to Hong Kong, Aden and Bahrain as well as to United Nations peacekeeping missions in Cyprus in 1973 and Beirut in 1984.

The Regiment’s last major engagement as an independent unit was the First Gulf War (1990-91). Three years later, it was amalgamated with The 17th/21st Lancers to form The Queen’s Royal Lancers.