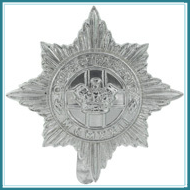 The Regiment was formed in 1922 by the merger of the 4th Royal Irish Dragoon Guards and the 7th (The Princess Royal's) Dragoon Guards. The new unit returned from India to Britain in 1929 and gained the 'Royal' prefix in 1936.

The unit mechanised in 1938 as a light tank reconnaissance unit and, during the following year, it became the first British armoured unit to arrive in France. It covered the British Expeditionary Force’s retreat to Dunkirk in May and June 1940 before being evacuated itself. It had been forced to leave its vehicles behind and was re-equipped with armoured cars as a reconnaissance unit. A small section of the Regiment also split off at the end of 1940 to form the 22nd Dragoons, which disbanded in 1945.

In 1943, the Regiment began training with heavier amphibious tanks ready for D-Day, becoming the first tanks to land at Gold Beach on 6 June 1944. It then took part in the Normandy breakout, becoming the first armoured unit to cross the Seine and taking a major part in the liberation of Lille. It then went on to lead the armoured column in Operation Market Garden and to fight in the north German campaign.

It spent 1946 to 1948 in Palestine, moving on to Libya before redeploying to Germany in 1954, the first of six postings there. Individual squadrons were sent to Aden and Cyprus in the mid-1960s and the Regiment, as a whole, also served in Northern Ireland in 1966 and 1978.

In 1992, 70 years after its formation, the regiment was merged with the 5th Royal Inniskilling Dragoon Guards to form the The Royal Dragoon Guards.