THE QUEEN ELIZABETH'S OWN ROYAL LANCERS. 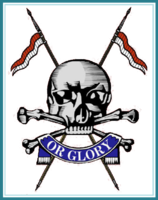 From its formation, the Regiment served in an armoured role with first Challenger 1 and then Challenger 2 Main Battle Tanks. In 2005, as part of the re-organisation of the Army, the Regiment converted to a reconnaissance role, re-equipping with Scimitar armoured vehicles.

The Regiment's nickname, the 'Death or Glory Boys', comes from their famous cap badge which is known as 'the motto'. This is the combined cap badges of the two antecedent regiments, featuring a Scarlett backing from the 16th/5th Queen's Royal Lancers and a skull and crossbones with the words ‘or glory’ from the 17th/21st Lancers. The Regiment’s four Sabre Squadrons were each named after one or the antecedent Regiments.

You can read about the current activities of The Royal Lancers by following this link to a UK MoD site.