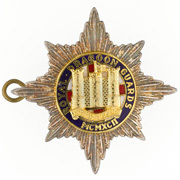 Each of these four regiments now equates to a squadron in The Royal Dragoon Guards, with ‘A’ Squadron perpetuating the traditions of the 4th, ‘B’ Squadron continuing the 7th, ‘C’ Squadron representing the 6th and ‘D’ Squadron the 5th. The regiment also has a fifth, Headquarters Squadron.

The Royal Dragoon Guards operates Challenger 2 main battle tanks as well as carrying out close reconnaissance in Scimitar armoured vehicles. Although its headquarters is in Catterick and its main recruiting ground is Yorkshire, it also recruits in Northern Ireland, with which all its regimental predecessors have links. The regiment has also inherited the image of Enniskillen Castle on its cap badge from the 5th Royal Inniskillings.

To read about the current actiivities of The Royal Dragoon Guards, you can follow this link to a UK MoD site.