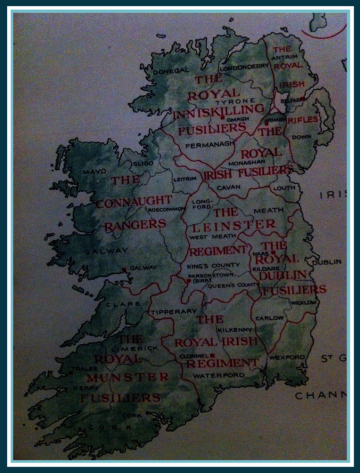 All Infantry Regiments comprised two Regular battalions but, at the outbreak of war, each raised a number of additional Service battalions and other battalions were held in Reserve or used for Garrisoning purposes.

The CWGC Roll of Honour database lists 34,063 men from the nine regular Irish Infantry Regiments including more than a thousand who died after the Armistice waas declared on 11th November 1918.

A further 4,180 men from other Infantry units, with Irish connections and who raised Territorial Force and Volunteer battalions, were killed during the First World War.

Figures as per 2014 and are subject to CWGC updates.

Men who were awarded the Victoria Cross while serving with Irish Regiments.

War diaries of some of the Irish Infantry Regiments.

Volunteer units were also raised amongst the large Irish communities across the world.