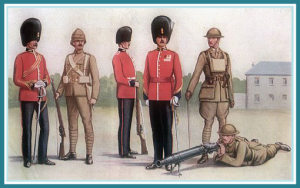 The Regiment was formed as a result of the 1881 Army reforms by merging two former East India Company fusilier regiments, the 101st Regiment of Foot and the 104th Regiment of Foot, each of which formed one of the new unit’s two regular battalions. The reforms also made it the local regiment for Clare, Cork, Kerry and Limerick, four of the counties in the province of Munster of south-west Ireland.

The 1st Battalion was in Canada at the time of the merger and sailed for Wales two years later, remaining in England and Ireland until sailing for South Africa in 1899. The 2nd Battalion was in Ireland in 1881, moving to Malta in the following year then onto India in 1884 where it remained until 1901, except for two years in Burma from 1886 onwards.

The 1st Battalion spent the whole Boer War in South Africa and then began a 12-year term in India and Burma in 1902 while the 2nd Battalion was only moved to Natal in December 1901, before coming home to Ireland in 1902 and then to England in 1909.

The 1st Battalion sailed from Burma to Calcutta on the outbreak of war, then marched to Bombay, arriving in England during January 1915. It then sailed again for Gallipoli two months later and landed at Cape Helles on 25 April, suffering such heavy casualties in the fighting that it had to be merged with the 1st Battalion, The Royal Dublin Fusiliers, to form a composite unit known as the ‘Dubsters’. It was finally evacuated to Egypt in January 1916 and reconstituted before being moved to the Western Front, remaining there until the end of the war.

The 2nd Battalion landed in France 10 days after the declaration of war and stayed on the Western Front throughout the conflict. It suffered such heavy casualties at Etreux in September 1914, where all its officers were killed or wounded that its chaplain, Father Gleeson, had to take over command of the battalion. It was badly mauled again during the German Spring Offensive in April 1918, leaving it with so few troops that it had to be absorbed by the 1st Battalion for about a month.

The Irish regiments were not required to raise Territorial Force battalions, though the Regiment did raise four Service battalions during the conflict who served in France, Salonika and Palestine.

Read more about the actions of the Royal Munster Fusiliers during the First World War.

Both regular battalions moved in 1919 - the 1st Battalion to occupation duties in Germany and the 2nd Battalion to Egypt.

All four of the Regiment’s recruiting counties were in southern Ireland so, when the Irish Free State was formed in 1922, the Regiment was disbanded.