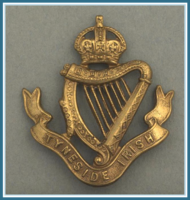 The Tyneside Irish formed a First World War infantry brigade, which was raised in 1914. It was officially numbered 103rd (Tyneside Irish) Brigade, which contained four Pals’ battalions, from Newcastle upon Tyne, largely made up of men of Irish extraction.

The Brigade's battalions were known as the 1st to 4th Tyneside Irish being constituent battalions of the Northumberland Fusiliers:

The Brigade's losses were so severe that, on the 6th July, it was transferred to 37th Dvision, along with the 102nd (Tyneside Scottish) Brigade, swapping with 112th Brigade. The two brigades returned to 34th Division on 22 August, taking part in further battles during September and at the battle of Arras the following year.

In February 1918, the 1st, 3rd and 4th Tyneside Irish Battalions were disbanded and the remaining battalion, the 2nd, was transferred to 116th Brigade, 39th Division. At that point, the Tyneside Irish Brigade ceased to exist and their colours were later laid up in Newcastle’s two cathedrals..

Read more about the actions of the Tyneside Irish during the First World War.

Unlike the London and Liverpool Irish, the Tyneside Irish was not re-formed for the Second World War.