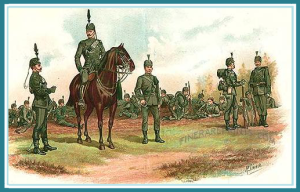 The Regiment was formed in 1881, as The Royal Irish Rifles by merging two Irish line infantry regiments, the 83rd (County of Dublin) Regiment of Foot and the 86th (Royal County Down) Regiment of Foot. Although neither of these two Regiments had been rifle units, the new Regiment was given that status and role.

The 83rd became the new unit’s 1st Battalion and already fighting in South Africa at the time, it moved to Guernsey the following year. In 1881, whilst in Bermuda, the 86th Foot was converted into the new regiment’s 2nd Battalion, before it moved to Nova Scotia in 1883.

Still in Britain on the outbreak of the Great War, the 2nd Battalion was deployed straight to the Western Front. The 1st Battalion joined it there from Aden in November 1914 and both remained there until the Armistice.The Regiment also raised 11 New Army Service battalions during the conflict.

Read more about the actions of the Royal Irish Rifles during the First World War.

In 1919 the 2nd Battalion was sent to Iraq, moving on to Egypt and Turkey before settling in India for nine years in 1923. The early 1920s led to two changes for the Regiment when the ‘Irish’ in its name was changed to ‘Ulster’ and it lost one of its recruiting counties, Louth, which became part of the Free State. Its other two counties, Antrim and Down, were in Northern Ireland and so the Regiment survived to exist beyond Irish independence.