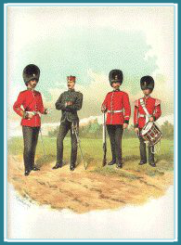 The Regiment was formed in 1881 by merging the 27th (Inniskilling) Regiment of Foot and the 108th Regiment of Foot (Madras Infantry) and the new unit became the County Regiment for four Irish counties: Donegal, Londonderry, Tyrone and Fermanagh.

In 1886, the 1st Battalion moved to South Africa and the 2nd Battalion to England and two years later it was sent to India, where it remained for 11 years, fighting in the Tirah campaign of 1897. Meanwhile, the 1st Battalion returned in 1899 to Britain.

Both battalions fought in the Boer War. The 1st Battalion landed in Durban in late 1899 and fought at Colenso and took part in the Relief of Ladysmith. The 2nd Battalion arrived in South Africa in 1901 and took part in anti-guerrilla operations.

In 1902, the 2nd Battalion moved to Egypt for six years but, by the outbreak of the First World War, it was back in England.

The 1st Battalion spent the immediate pre-war years in Crete, Malta, China and India, only joining the conflict in April 1915, when it landed at Gallipoli. The 2nd Battalion deployed straight to the Western Front in August 1914 and stayed there throughout the conflict, with the 1st Battalion joining it in March 1916. The Regiment also formed nine New Army battalions, which fought in Salonika, Palestine and on the Western Front. One of their reserve battalions, the 12th (Service) Battalion, also fought against the Easter Rising in Dublin in 1916.

Read more about the actions of the Royal Inniskilling Fusiliers during the First World War.

The Regiment was not disbanded on Irish independence in 1922 although the 2nd Battalion went into suspended animation. The Regiment spent the inter-war years in India, Iraq, England, Northern Ireland, Malaya and India as from 1924 to 1937, the Royal Inniskilling Fusiliers and the Royal Irish Fusiliers formed a single corps, though both regiments retained their original titles. At the end of that period, the Royal Inniskilling Fusiliers re-formed their 2nd Battalion.

During the Second World War, the 2nd Battalion, as part of 5th Division, fought in the retreat to Dunkirk in June 1940, the capture of Madagascar in 1942 and fought throughout the Sicilian and Italian campaigns from 1943 to 1945.

The war raised 6th Battalion fought in Tunisia, Sicly and on the Italian mainland at Termoli,  the Sangro river, Cassino and Lake Trasimene, as part of 38th (Irish) Brigade. In August 1944, men of the 2nd and 6th Battalions were merged, with the latter being disbanded and most transferring to the 2nd Battalion or other units within the Irish Brigade. In the autumn of 1944, the brigade was fighting in the mountains north of Florence before taking a lead role in the final Allied breakthrough at the Argenta Gap during April 1945. Moving into Southern Austria during May 1945, the Irish Brigade took part in peacekeeping duties before being finally disbanded in 1947

The 1st Battalion remained in the Indian theatre throughout the war, fighting in the Arakan in Burma during 1942 and 1943 before moving to Hong Kong following Indian partition in 1947.

The 2nd Battalion was briefly disbanded again from 1948 to 1952, serving in Egypt and Cyprus before being disbanded for good in 1956.

The Regiment fought post-colonial insurgencies in Malaya (1948-60) and Kenya (1952-56) and other postings followed to West Germany, Kuwait and Cyprus.

In 1968 the Regiment merged with the two other regular infantry regiments of Northern Ireland, the Royal Ulster Rifles and the Royal Irish Fusiliers (Princess Victoria's) to form the Royal Irish Rangers (27th (Inniskilling), 83rd and 87th).