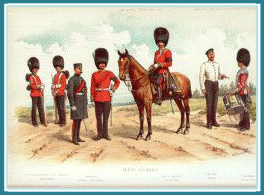 The Regiment was formed on 1 April 1900 by order of Queen Victoria in response to the many courageous actions performed by Irish regiments during the Second Boer War.

The Irish Guards' first Honorary Colonel was Field Marshal Lord Roberts, known to many troops as 'Bobs'. For a time, the Regiment gained the nickname 'Bob's Own' but later became known affectionately as 'The Micks'. In 1902, the Regiment's first Colours were presented by Edward VII in May at Horse Guards Parade.

A few Irish Guardsmen saw action as mounted infantry in the final stages of the Boer War. Otherwise, the Regiment was stationed in the UK for the first fourteen years of its existence, performing ceremonial duties in London until the beginning of the First World War.

Read more about the actions of the Irish Guards during the First World War.

DurIng the Second World War, the 1st Battalion first fought in Norway during 1940 and then in Tunisia and Italy throughout 1943 and early 1944. After suffering heavy casualties at Anzio, the battalion returned to England where it took on the role of a training unit.

The 2nd Battalion fought in France during 1940 before returning to England where they joined up with the newly formed Guards Armoured Division and in which they were joined by the war raised 3rd Battalion. The Division fought in Normandy during June 1944 before advancing through Belgium and were involved in the Arnhem fighting in September. The 2nd and 3rd Battalions took part in the final Allied advances across the Rhine and continued fighting until the final German surrender in early May 1945.

Both the 2nd and 3rd Battalions were disbanded soon after the war and during the 1950s and 60s, the 1st Battalion served in Palestine, Libya, Egypt, Germany, Cyprus, Kenya and Malaya, and would later go to Hong Kong.

In 2000, the 100th year of the creation of the Irish Guards, the city of Liverpool granted them the freedom of the city and in the following year, the Regiment took part in training exercises in Poland, BATUS in Canada and the large exercise in Oman called Saif Sareea II.

The Regiment deployed to Kuwait during the build-up to the Iraq War in 2003 with the Irish Guards forming part of the 7th Armoured Brigade (successor of the famed 7th Armoured Division, 'The Desert Rats') and began training for the war. The battalion was split up with companies, platoons and sections being attached to various units of the Desert Rats. Upon crossing the Iraq border, the Desert Rats began the journey towards the area around Basra, gradually taking control of much of the area that surrounded Iraq's second largest city.

The 1st Battalion, Irish Guards became the first unit to be officially awarded battle honours for service in Iraq in 2005 - this was to enable them to be displayed on the battalion's new regimental colour during the Sovereign's Birthday Parade.

You can read about the current activities of the Irish Guards by following this link to a UK MoD site.