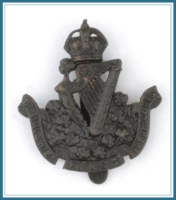 The Liverpool Irish was raised in 1860 as a volunteer Corps of Infantry.

Liverpool's large Irish Irish community formed the 64th Lancashire Rifle Volunteer Corps on 25 April 1860, one of many raised across Britain in response to heightened tensions with France. The Liverpool Irish became a volunteer (later territorial) battalion of the King's (Liverpool) Regiment in July 1881 and as such, it fought in the Second Boer War.

During the First World War, its two service battalions were involved in numerous battles that included those at Givenchy, Guillemont, Third Ypres, Cambrai, and the Hundred Days Offensive of 1918. More than 900 Liverpool Irishmen were killed during the war time period.

Read more about the actions of the Liverpool Irish during the First World War.

Disbanded in 1922, the Liverpool Irish reformed before the Second World War and constituted the nucleus of the 7th Beach Group that landed at Juno Beach on 6 June 1944, its only major engagement of the war, when 46 of its men were killed.

Conversion to an anti aircraft unit occurred in 1947, but the regimental status of the Liverpool Irish ceased in 1955 upon its reduction to a battery.

Since 1967, the lineage of the Liverpool Irish has been continued by "A" Troop, i208 (3rd West Lancashire) Battery, 103rd (Lancashiire Artillery Volunteers) Regiment.