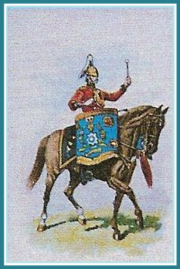 Like many other cavalry regiments formed in 1685, this Regiment was created by merging several existing troops of cavalry. It was established to shore up King James II's powerbase in London less than a month after the defeat of the Monmouth Rebellion, but three years later it went over from James to King William III.

It fought for William at the Boyne and in the Low Countries and rose from the 6th to the 5th Regiment of Horse in 1691. The regiment was placed on the Irish Establishment in 1699 and remained there for over a hundred years, other than a brief period spent raiding the French coast in 1795. The Regiment faced the Irish Rebellion in 1798, fighting at Naas, Arklow and Vinegar Hill and the following year they came off the Irish establishment and moved to England, where they spent all but one of the next 12 years.

In 1811, the unit was posted to the Peninsula as one of the three regiments in the brigade commanded by John Le Marchant, but disease meant that it was soon short of both men and horses, whilst poor decisions by Le Marchant's successor, John Slade, meant that the brigade rarely saw action. Finally, the 4th Dragoon Guards had to leave its few remaining horses behind and take ship for home in 1813. From then until 1894, the unit alternated between English and Irish garrison duties.

Two rare instances of action during this period were the unit's participation in the charge of the Heavy Brigade at Balaklava in 1854 and in the battle of Tel-el-Kebir in Egypt in 1882. At the latter action, it did not suffer a single casualty. The unit's first experience of India only came in a fourteen-year posting in 1894.

It deployed from England to France with the British Expeditionary Force's 1st Cavalry Division in 1914 and, on 22 August 1914, the regiment's 'C' Squadron charged a German cavalry column just east of Mons, in what was the British Army's first action of the First World War.

Read more about the actions of the 4th Royal Irish Dragoon Guards during the First World War.

It briefly deployed to Ireland in 1919 as it slipped towards civil war, then to England later that year and finally to Secunderabad in India, where in 1922 it amalgamated with the 7th (The Princess Royal's Dragoon Guards to form the 4th/7th Dragoon Guards.