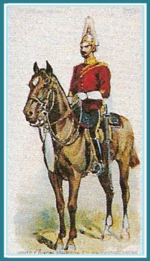 In 1688 William III landed in Devon to seize the throne from his father-in-law King James II. In Ireland, the Protestants in the town of Inniskilling formed several regiments of cavalry to support William. and these regiments were merged into one in June 1689, just three months after James landed in Ireland.

The new Regiment was named Sir Albert Cunningham’s Regiment of Dragoons, after its first colonel, and immediately went to relieve Derry. It then linked up with William’s invasion force under Marshal Schomberg, which had landed in August 1689, guarded William himself at the Battle of the Boyne, and also fought at Aughrim.

Until 1742, the Regiment generally stayed in Ireland, though it did deploy to Scotland in 1715 to fight the First Jacobite Rebellion, charging at Sherrifmuir. It was also sent to Europe in 1742 for the War of the Austrian Succession and in 1758 for the Seven Years War. It joined decisive cavalry charges at Laffeldt in 1747 and Warburg in 1760 and served in several raids on the French coast during 1758. This period also saw it gain the designation 6th (Inniskilling) Dragoons in 1751.

In 1763, the Regiment began a 90-year period on garrison duties in the British Isles, frequently returning to Ireland from 1809 onwards. That period was only broken by two deployments to the continent. The first of these was a four-year spell in Flanders, the Netherlands and Germany, starting in 1793. The second came in April 1815, when it was rapidly embarked for Belgium less than a month after Napoleon escaped his exile on Elba and, in June that year, it was part of the decisive heavy cavalry charge by the Union Brigade at Waterloo.

The unit’s long garrison service finally came to an end when it was sent to the Crimea in 1854, losing all its horses en route in a fire on board its troop ship, but still managing to take part in the charge of the Heavy Brigade at Balaklava. It then took on peacekeeping roles in India in 1857 after the Mutiny and in South Africa in 1880 after the Zulu War.

It fought as mounted infantry in the Boer War and one of its lieutenants, Lawrence Oates, was recommended for the Victoria Cross and is best known for his last words - 'I am going out, I may be some time' - shortly before his death on Scott’s expedition to the South Pole in 1912.

The unit served mainly as infantry on the Western Front during the First World War, suffering heavy casualties on the rare occasions it charged as cavalry.

Read more about the actions of the 6th Inniskilling Dragoons during the First World War.

With Ireland sliding towards civil war during the post-war period, the Regiment was kept in Britain from 1919 onwards, until its 1922 amalgamation with the 5th Dragoon Guards (Princess Charlotte of Wales's) to form the 5th/6th Dragoons.