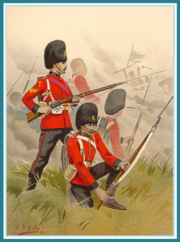 At the time of the merger, the 87th Foot was in England and became the 1st Battalion before seeing action in the Egyptian campaign during the following year and in 1883, it moved to India, remaining there for the next 16 years.

The 89th Foot was in India in 1881 and became the 2nd Battalion and only returned to Britain in 1884, via the Sudan. DurIng 1889, Queen Victoria presented new Colours to the 2nd Battalion - she had actually presented them with Colours twice before, when it was still the 89th Foot. The 1st Battalion sent detachments to the Gold Coast in 1895 and to the Sudan in 1898 but, in the following year, both the Regiment’s regular battalions deployed to the Boer War.

The 1st Battalion was back in Britain well before the outbreak of the First World War, deploying to the Western Front in August 1914 and remained there right up to the Armistice.

The 2nd Battalion joined the 1st Battalion in France during December 1914, moving from India, where it had been since 1902. It was then sent to Salonika in November 1915 and onto Palestine in October 1917, before being disbanded in 1919.

The Regiment raised six New Army battalions during the conflict, including the 5th and 6th (Service) Battalions, which both landed at Gallipoli in 1915.

Read more about the actions of the Royal Irish Fusiliers during the First World War.

Since its inception, the Regiment had been the county unit for the three Irish counties of Armagh, Cavan and Monaghan. The last two of these became part of the Free State in 1922, but as Armagh was in Northern Ireland, the Regiment survived. For 13 years (1924-1937), the Regiment formed a single Corps with the Royal Inniskilling Fusiliers, though both retained their individual regimental identities and titles.

The Regiment spent the inter-war years in Egypt, England, India and Sudan and re-formed a 2nd Battalion in 1938 to serve in Egypt and on Malta.

The 1st Battalion was stationed in Guernsey at the outbreak of the Second World War and immediately moved to France before being withdrawn to Britain during May 1940. As part of 38th (Irish) Brigade, it then sailed to North Africa in November 1942 and joined the 1st Army's campaign in Tunisia, fighting near Bou Arada and in the mountainous areas north of Medjez-el Bab. The Irish Brigade went onto fight throughout the Sicilian and mainland Italian campaigns from 1943 to 1945, taking part in major battles at Centuripe, Termoli, the Trigno and Sangro rivers, Cassino, Lake Trasimeno and Monte Spaduro before taking a leading role in the final Allied breakthrough at Argenta Gap during April 1945. The brigade then moved into Southern Austria in May 1945 to take part in peacekeeping duties.

In 1943, the 2nd Battalion was captured by German forces on the Greek island of Leros and the 6th Battalion was then re-numbered 2nd Battalion to replace it, but was mainly stationed in Britain for the rest of the war and disbanded in 1948.

The Regiment moved to Jordan in 1949, then to West Germany during the following year and onto Libya in 1958. However, its most significant post-war postings were to Korea in 1954 and Kenya during 1955.

In 1966, the Regiment moved to England, sending detachments from there to Swaziland and Aden before being amalgamated in 1968 with the two other regular infantry regiments of Northern Ireland, the Royal Ulster Rifles and the Royal Inniskilling Fusiliers, to form the Royal Irish Rangers (27th (Inniskilling) 83rd and 87th).