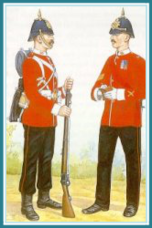 The 100th Foot was in India at the time of the merger, becoming the new unit’s 1st Battalion and remained there until 1894. The 109th Foot was in Aldershot in 1881 and became the 2nd Battalion, then moving to Ireland from 1882 to 1888, before a further period in England.

In 1898 the Regiment’s 1st Battalion began two years in Halifax, Nova Scotia, making it the last-ever British infantry unit to garrison Canada and, in 1900, that battalion sailed from Canada, via England, to South Africa, where it remained until 1902. The 1st Battalion then spent nine years in Ireland and England while the 2nd Battalion arrived in South Africa from the West Indies in 1902, moved to Mauritius in 1905 and two years later went to India.

In 1911 the 1st Battalion was moved to India and the 2nd Battalion to Cork in Ireland and so the latter was able to deploy to France soon after the outbreak of the First World War, landing at St Nazaire on 12 September 1914. The 2nd Battalion remained on the Western Front until the end of the war, absorbing the remnants of 6th Battalion, Connaught Rangers in April 1918, after the latter had suffered heavy losses facing the German Spring Offensive.

The 1st Battalion arrived on the Western Front in December 1914 but, in November the following year, it was posted to Macedonia and in September 1917, the 1st Battalion moved to Egypt and Palestine for two years. At the end of the war it returned to India, where it stayed until 1922.

Read more about the actions of the Leinster Regiment during the First World War.

In the meantime, the 2nd Battalion had settled into barracks at Colchester, but was detached for post-plebiscite duties in Upper Silesia from June 1921 until March 1922. HRH The Prince of Wales - later King Edward VIII - had been appointed Colonel-in-Chief in 1919.

The Regiment recruited from five Irish counties, all of which became part of the Irish Free State in 1922. The Regiment was disbanded that year, depositing the Colours of its two regular battalions at Windsor Castle. The 1st Battalion presented its regimental silver to the Government of Canada.