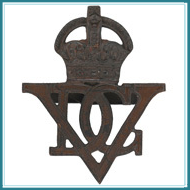 In 1922, the Inniskillings (6th Dragoons) and the 5th Dragoon Guards (Princess Charlotte of Wales's) were amalgamated into a single Regiment, with the King of Belgium as its first Colonel-in-Chief. The new unit was at first known as the 5th/6th Dragoons, but in 1927 it became the 5th Inniskilling Dragoon Guards, later gaining a 'Royal' prefix in 1935.

The unit finally mechanised with light tanks and troop carriers in 1938 and fought in northern France during the 1940 retreat to Dunkirk. It did not return to action until 1944, landing a little after D-Day, fighting in France, the Low Countries and Germany and reaching Hamburg by the time of the German surrender.

The regiment was sent to Korea in 1951 where it was involved in fierce fighting in the United Nations forces against the army of Communist China. During the post war years, the regiment also saw service in Egypt, Aden, Bahrain, Hong Kong, Libya and Cyprus.

In 1981 it was the first Irish regiment to be deployed in Northern Ireland and also served as part of BAOR, based in Paderborn in Germany. In 1991 it began preparing to join the First Gulf War, but that conflict came to an end before the unit could be posted there.