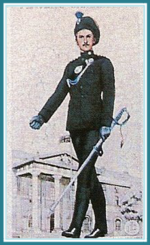 When it was formed in 1859 as the 28th Middlesex (London Irish) Rifle Volunteer Corps, numbered among its ranks were the Marquesses of Donegall and Conyngham, the Earls of Arran and Belmore, Lord Palmerston (who joined as a private soldier), and WH Russell of 'The Times'. Re-numbered as the 16th in 1880, they became a battalion of the Rifle Brigade the following year.

During the war in South Africa, the battalion sent eight officers and two hundred men for active service and one officer won the Distinguished Service Order and another member gained seven bars to his South Africa Medal. In recognition of their service, the London Irish were granted their first battle honour of 'South Africa 1900-1902'.

The London Irish transferred to the newly formed Territorial Force in 1908 and, at that time, were renamed the 18th (County of London) Battalion, The London Regiment (London Irish Rifles).

During the First World War, the London Irish raised three battalions and the 1st Battalion went to France in March 1915 as part of the 47th (2nd London) Division and fought right across the Western Front until November 1918.

The 1st Battalion saw its first action in May at the Battle of Festubert and in September 1915, at the Battle of Loos, it distinguished itself by the capture of enemy trenches led by the Captain of the football team, Rifleman Edwards, who took a football and kicked it towards enemy trenches. His fellow soldiers joined in and despite intense enemy gun fire, the ball was kicked across 'No Man's Land' until it was finally deposited into the German trenches. In a desperate and bloody battle, the London Irish captured and held their objective for four days. The football itself is still preserved in the Regimental Museum and the memory of Frank Edwards is commemorated annually by the Regiment on Loos Sunday.

The 2nd Battalion also served on the Western Front where its first duty was to take over part of the line at Vimy Ridge in July 1916. From France, the Battalion moved to the Salonikan front and later served in Palestine, being one of the first troops to enter Jerusalem. On 23 December 1917, at Khurbet Adesah, the Battalion's officers and NCOs were reduced to one subaltern and one sergeant and the 2/18th was subsequently disbanded in July 1918. The 3rd Battalion had remained a reserve battalion throughout the War.

Read more about the actions of the London Irish Rifles during the First World War.

In 1937, after the London Regiment was disbanded, the "Irish" became known as the London Irish Rifles, The Royal Ulster Rifles. The Caubeen - the plumed bonnet - was adopted officially for wear by all ranks. Unlike other Irish regiments, the London Irish wear the Caubeen pulled down on the left side (instead of the right), a distinction maintained to this day.

In 1939, the London Insh was organised into two battalions. The 1st Battalion left England in August 1942 to serve with 56th (London) Division in Iraq and Italy taking part in a number of battles including those at Monte Camino, Anzio and at the Gothic Line, before taking part in the final assaults in Northern Italy during April 1945.

The 2nd Battalion fought in three campaigns with 38th (Irish) Brigade throughout Tunisia, Sicily and on the Italian mainland during 1942 to 1945. They were the first marching troops to enter Tunis in May 1943 before taking part in the battles at Centuripe, the Sangro river, Cassino, Lake Trasimeno, Monte Spaduro and also taking a lead role in the final Allied breakthrough, alongside the 1st Battalion, at the Argenta Gap.

After the Second War, the 1st Battalion re-formed as part of the Royal Ulster Rifles but the 1967 re-organisation of the TA reduced the London Irish to company strength. The three Irish Line infantry Regiments had combined to form the Royal Irish Rangers and the company became 'D' Company (London Irish Rifles) 4th Bn The Royal Irish Rangers, remaining so until the re-formation of The London Regiment in 1992.

To read about the current activities of the London Irish Rifles, you can follow this link to a UK MoD site.