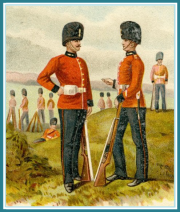 As a result of the 1881 Army reforms, two former East India Company regiments, the 102nd Regiment of Foot (Royal Madras Fusiliers) and the 103rd Regiment of Foot (Royal Bombay Fusiliers), were merged to form the Royal Dublin Fusiliers, with each regiment becoming a battalion in the new unit. It also included the territorial battalions for four Irish counties, including County Dublin itself, but they were not always based there. Indeed, the new 1st Battalion was in Ceylon at the time of the Fusiliers' formation, only coming to Britain five years later.

The 1st Battalion was soon re-deployed to the Boer War and a detachment was escorting an armoured train carrying the young war correspondent for the 'Morning Post', Winston Churchill, when it was ambushed on 15 November 1899. The train eventually managed to escape but Churchill and the detachment were captured. It also took part in the siege of Ladysmith and the battles at Colenso and Tugela Heights.

The Regiment raised five Service battalions during the First World War, in which its men were awarded three Victoria Crosses, and fought at Gallipoli and in Palestine as well as on the Western Front.

Read more about the actions of the Royal Dublin Fusiliers during the First World War.

The Regiment also became entangled in the Easter Rising in Dublin during 1916, when three of its reserve battalions were sent to suppress the rebellion.

The post-war period saw the 1st Battalion become part of the British Army of occupation in Germany, whilst the 2nd Battalion was stationed in Turkey, India and then England.

In 1922, when the Irish Free State was established, the five line infantry regiments that traditionally recruited in southern Ireland were disbanded and on 12 June that year, the Regiment's Colours were laid up at Windsor Castle.