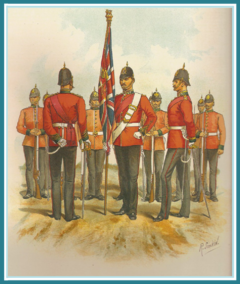 The Regiment was formed during the army reorganisation of 1881, by merging the 88th Regiment of Foot (Connaught Rangers) and the 94th Regiment of Foot into a new two-battalion unit. It took its title from the 88th which traditionally recruited in the Connaught province of western Ireland.

The 88th was in India at the time of the merger and remained there, as the new Regiment’s 1st Battalion, until 1890. The 94th became the 2nd Battalion and, a year after the amalgamation, returned to Ireland from South Africa. Between them, the two battalions spent a total of 12 years in Ireland between 1881 and 1914.

The 2nd Battalion sent a detachment to the Gordon Relief Expedition in 1884 as camel-mounted infantry and in the 1890s deployed to Egypt and the Sudan in its entirety to take part in the Dongola Expeditionary Force. It then moved onto India from 1897 onwards.

The 1st Battalion deployed to South Africa in 1899, fighting throughout the Boer War (1899-1902) before moving back to India in 1903. It was from India that it deployed to the Western Front at the start of the First World War and it arrived there in October 1914, two months after the 2nd Battalion’s arrival in that theatre.

As well as its two regular battalions, the Regiment raised two Service battalions and their two Reserve battalions faced the Easter Rising in 1916. The 6th Battalion included Thomas Hughes, who was awarded the Victoria Cross, but suffered such heavy losses during the 1918 German Spring Offensive that its survivors had to be merged into another regiment.

The 5th Battalion fought at Gallipoli, Salonika and in Palestine and survived the war but was renumbered in 1919 to give the Regiment a 2nd Battalion once again.

Read more about the actions of the Connaught Rangers during the First World War.

The new 2nd Battalion remained in England for the rest of the Regiment’s existence, except for a year on occupation duties in Silesia in 1921. During 1919, the Irish War of Independence broke out, and the 1st Battalion did not re-deploy back to Ireland at the end of the First World War but instead spent a short time in England before arriving back in India again during November 1919.

Months later, in June 1920, some of the Regiment’s men mutinied at Jullundur in protest at the behaviour of the ‘Black and Tans’ in Ireland and 77 of the 88 men involved in the mutiny were sentenced to imprisonment, but only its ringleader, Private James Daly, was shot, making him the last-ever British soldier or sailor to be shot for mutiny.

In 1922 the Irish Free State was formed and all five British Regiments that recruited there, including the Connaught Rangers, were disbanded.

Link to the full history of the 2nd Bttn, Connaught Rangers (94th Foot).