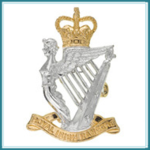 The Regiment was formed in July 1968 by the merger of the Royal Innislilling Fusiliers, the Royal Irish Fusiliers (Princess Victoria's) and the Royal Ulster Rifles. Initially composed of three battalions, the regiment was reduced to two later that year and became the county regiment for the six counties of Northern Ireland.

The 1st Battalion spent the first two years of its existence in England while the 2nd Battalion was sent to Gibraltar and Bahrain. Both battalions spent much of the 1970s and 1980s serving with the British Army of the Rhine in Germany and on garrison duties in England.

There were deployments to the Falkland Islands (1983) and Cyprus with United Nations peace-keeping forces (1976, 1977 and 1991) and the Rangers also served as fire-fighters in 1977 during the national strike by firemen. Tours of Northern Ireland followed for both battalions in 1988 and 1990.

A link to a video of the Tercentenary of the Regiment.