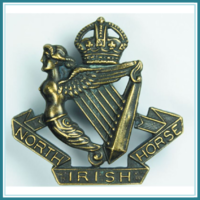 After much legal wrangling over organisational issues, recruiting for four Squadrons commenced on 17th February 1903: 'A' Squadron was to be located in Belfast, 'B' Squadron in Londonderry, 'C' Squadron in Enniskillen and 'D' Squadron in Dundalk. The first annual camp was held that year in Dundalk.

In July 1908, they became a Special Reserve Cavalry Regiment and their name was changed to the North Irish Horse in September.

At the outbreak of First World War, the North Irish Horse left for France during August 1914 and immediately became GHQ troops at Le Cateau. A second Squadron was rapidly formed, and arrived by the end of the month and acted as rearguard to 4th Division in the retreat from Mons before being attached to 5th Division. In 1915, three more squadrons went to France, as Divisional Cavalry Squadrons.

Three of the five Squadrons were formed into one Regiment. and the others, along with the Divisional Cavalry Squadron of 36th (Ulster) Division,  6th (Inniskilling) Dragoons, were formed into a second Regiment with both becoming Corps Cavalry Regiments.

In September 1917, the second Regiment was dismounted and its personnel were attached to battalions of the Royal Irish Rifles and the Royal Irish Fusiliers within 36th (Ulster) Division, while the other was re-roled as a Cyclist Regiment in March 1918.

Read more about the actions of the North Irish Horse during the First World War.

The North Irish Horse was demobilised in August 1919, but was re-established in 1921 as a dismembodied Cavalry Militia Regiment and continued to appear in the Army List until the Second World War in a "state of suspended animation". Meanwhile, the South Irish Horse had been disbanded at the end of July 1922 on the establishment of the Irish Free State.

During May 1939, the North Irish Horse was reconstituted and, in June 1940, it was ordered to Portrush for coastal defence work which was carried out with 1920 vintage Rolls Royce armoured cars and modern Humber reconnaissance vehicles. The battle role was changed from an Armoured Car Regiment to an Infantry Tank Unit, and in July 1941, training commenced with Valentine tanks. In October of the same year, the North Irish Horse moved to England, where it was equipped with the new Churchill tanks and, following intensive training, an anti-invasion function was undertaken in Norfolk and Suffolk.

In January 1943, the Regiment, as part of 25th Army Tank Brigade, sailed for Algeria, joining up with the First Army in Tunisia and was immediately rushed into action at Hunt's Gap and Sedjenane, where they took part in the halting of the enemy's northern offensive. The North Irish Horse played a prominent part in all the ensuing battles during the campaign, and being among the first armoured units to enter Tunis on 8th May. During the campaign it had supported four different divisions and its part in the assault on Longstop Hill was perhaps the most outstanding exploit.

In April 1944, the Regiment joined the Eighth Army in Italy and its first action was in support of 1st Canadian Infantry Division in a frontal attack on the Hitler Line, one of the strongest defensive positions ever constructed. The line was pierced and heavy casualties were inflicted on the enemy but, in the process, the Canadians suffered grievously and the North Irish Horse lost 36 officers and men killed and 36 were wounded, as well as 24 tanks being put out of action, although 15 were later recovered. In appreciation of the support they received, the Canadians asked the Regiment to wear the Maple Leaf.

Following the breakthrough of the Hitler Line, the Regiment took part in the pursuit to the River Arno south of Florence  The transfer of the Eighth Army to the Adriatic coast in August was followed by the battle of Gothic Line and the autumn was spent in a relentless fight to reach the River Lamone in atrocious weather over inhospitable country. The Regiment was transferred to 21st Tank Brigade in December, and was responsible for holding the Army's right flank, until the start of the spring advance which resulted in the German surrender in Italy with the Regiment's tanks being the first to reach the river Po.

Casualties during the North African and Italian Campaigns included 9 officers and 64 other ranks killed and there are Memorial Windows to the dead of both World Wars in the entrance chamber of Belfast City Hall.

In 1947, the North Irish Horse was reconstituted as an Armoured Car Regiment of the Territorial Army, equipped with Daimler armoured cars and Dingo scout cars, and recruited all over Northern Ireland with TA centres in Belfast, Londonderry, Lurgan, Ballymoney and Enniskiien. The North Irish Horse survived major re-organisations and was one of only three Armoured Car Regiments to be retained.

In 1967, a new Yeomanry Regiment was formed, which consisted of Sabre Squadrons from the North Irish Horse, the Royal Wiltshire Yeomanry, the Sherwood Rangers and the Kent & County of London Sharpshooters Yeomanry. with the Headquarters Squadron being raised from the Westminster Dragoons. In 1969, 'B 'Squadron in Londonderry was re-badged as a Signal Squadron and became part of 32th (Scottish) Signal Regiment.

In 1993, the North Irish Horse lost its position wth the Royal Yeomanry and became an independent Light Recce Squadron, equipped with Land Rovers, and came under command of 107th (Ulster) Brigade. The Signal Squadron survived and became part of 40th (Ulster) Signal Regiment.