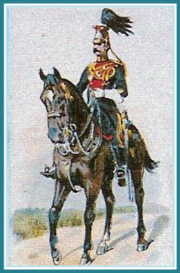 The 5th Lancers was first raised in June 1689 at Inniskilling in Ireland to fight for King William III against James II at the Boyne and Aughrim. It remained in Ireland throughout its life, excluding two deployments to the Low Countries between 1694 and 1713. On the first of these, the Regiment captured three French kettledrums at Blenheim. At Ramillies in 1706, this Regiment and the 2nd Dragoons captured two whole French regiments, leading to the Regiment being renamed the Royal Dragoons of Ireland and given Grenadier caps as part of its uniform.

Its duties in Ireland were mainly limited to policing, garrison duties and suppression of discontent, but separate billets and infrequent musters left the regiment in a state of disorganisation. This came to a head in the Irish rebellion in 1798, during which it was infiltrated by three rebels and accused of sympathies with their cause. The exact extent of those sympathies is still controversial, but the following year the Regiment was moved from Ireland to Chatham in southern England and disbanded.

In the aftermath of the Crimean War and Indian Mutiny, the British Army needed more cavalry troops, so a new 5th Regiment of Dragoons was raised in 1858, though three years after its formation it changed from dragoons into lancers. However, the new unit was only ranked after the 17th Lancers due to its predecessor's dishonourable disbandment.

This unit was mainly used on garrison duties in England and Ireland, though from 1864 to 1873 and 1888 to 1897 it was sent to India. It also sent two squadrons to fight in Egypt and the Sudan in 1885, charging with lances at Suakin. The whole regiment deployed to the Boer War in 1899, where its 'C' Squadron took part in the charge at Elandslaagte.

The Regiment spent the pre-war period in England and Ireland. In 1902, Edmund Allenby became its commanding officer, rising to become its last colonel ten years later and winning fame for his Middle Eastern commands during the First World War.

In March 1914, the Regiment was encamped at Curragh as part of 3rd Cavalry Brigade, which was mistakenly informed that its officers would have to impose home rule on northern Ireland or resign, in what became known as the Curragh Incident. Many of the brigade's officers were Irish Protestants and so over 80 per cent of them initially offered to resign before the mistake was corrected. This correction also allowed the 5th Lancers to sail for the Western Front five months later.

The Regiment remained on the Western Front for the rest of the war, fighting at Mons in both 1914 and 1918. DurIng the 1918 action, it suffered the very last British casualty of the war, Private George Ellison, who was shot by a sniper 90 minutes before the Armistice came into effect.

Read more about the actions of the 5th Royal Irish Lancers during the First World War.

It then deployed to Risalpur in India, where it was disbanded in 1921, only for a single squadron of the regiment to be re-raised the following year to merge with The 16th Queen's Lancers to form the 16th/5th Lancers.